A simple and delightful variety with spires of purest white in the first year.

How to Grow Verbascum from Seed

Verbascum, or Mullein, combines architectural form with beautiful colouring, and is a magnet for butterflies. This evergreen cottage garden favourite is often combined with hollyhocks or delphiniums and a useful addition in borders, Mediterranean or gravel gardens and for exposed coastal planting

Verbascum seeds can be sown directly into the garden ideally in July and August up to two months before first frosts are expected. Sow sparingly and thin the seedlings when large enough to handle, spacing of 38 to 45cm will be required.

Indoors grown seeds should be sown during January to March, 6 to 8 weeks before planting outdoors in April to May. Mullein plants have a long tap root, so root trainers or long pots are useful. Sow in trays, pots or growing cells allowing 2.5cm (1in) spacing between the seeds. Cover lightly with compost or medium-grade vermiculite to help keep the seed moist during germination. Keep the seeds shaded and the soil lightly moist after sowing. Germination normally takes place within 14 – 21 days at 70F.

Following germination, reduce the moisture levels somewhat, allowing the growing medium to dry out slightly before watering again. Transplant after about 6 weeks into 10-18cm (4 to 7in) pots and gradually harden off before planting out when all risk of frost has passed.

To encourage the plant to bloom again or to extend the bloom season cut off the centre stalk after initial flowering, at the point just above where the side shoots emerging. 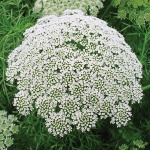 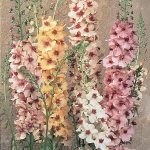