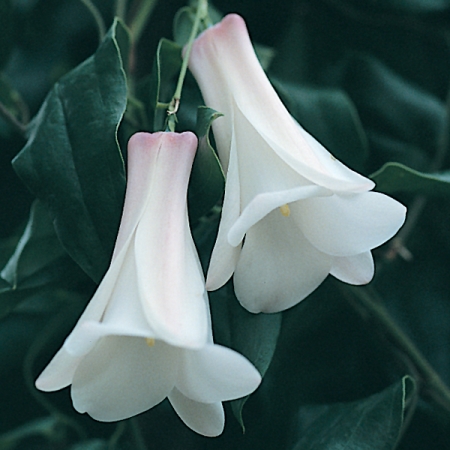 The rare and seldom available seed from the named variety White Cloud. Should produce 100% pure white flowers but an occasional blush might occur. We emphasize again - very rare.

How to Grow Lapageria from Seed

This beautiful vine is frost hardy and could survive outside in milder areas provided it is afforded some shelter and protection from extreme cold, very harsh weather and drying winter winds. It will live happily in a greenhouse or conservatory providing that it is not exposed to long periods of direct sunlight. It will be happiest in fertile, moist well-drained, humus-rich soil, or ericaceous compost with added sharp sand indoors under filtered light.

Lapageria seeds can be sown all year round in a shady position, germination typically takes 40 to 60 days at a temperature of 65F. Lapageria is not a fan of lime, always water with soft water, or boiled rain water and grow in lime free Ericaceous compost.

Chilean Bellflower seed can be sown in trays covered with about 6mm. of crushed horticultural grit.

If the tray is on a heated mist propagation bed, shoots should begin to appear in 4 or 5 weeks, however if the seed tray is left in a cool, shady and frost free spot it may take 3 months for the first of the shoots to appear. The seed tray should never be allowed to dry and the growing mix should always be moist but never waterlogged.

When the seedlings have 2-3 leaves gently remove from seed tray and plant into individual 3 inch pots of loose, Ericaceous compost. Keep them just moist, in semi-shade and do not expect rapid growth in the first year. Chillean Bellflower seedlings grow slowly and take several months to get established.

New growth always appears as a basal shoot through the compost usually in late summer or early autumn. 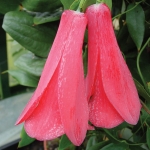