Bitter free mini Eggplants in ivory white simply festoon the branches and should be picked 3-4" long. 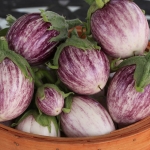